British luxury fashion house BURBERRY presented their Fall Winter 2021 ‘Burberry Open Spaces’ campaign featuring models Xiaoyi Liu, Charlotte Samaroo, Joshua Smith and Ben Loader. Lensed by fashion photographer Ewen Spencer, with a video by Megaforce, the campaign blurs the lines between reality and fantasy.  In charge of styling was Ana Steiner, with Creative Production by Riff Raff Films and Choreography by (La)Horde. Captured in the British countryside, the campaign explores the freedom to move into new spaces beyond boundaries and expectations.

Freedom allows us to be creative, to dream, to be anything or anyone. Burberry, like me, has had freedom at its heart since the very beginning. This campaign celebrates the fearless spirit of exploration which connects us with one another and the natural world. It’s about pushing boundaries and pursuing endless possibilities – looking to the future and connecting us all.
– Riccardo Tisci, Chief Creative Officer

As the world opens up again, the campaign explores this spirit through a youthful, dreamlike lens. For the campaign film, Riccardo collaborated on the creative and film direction with Megaforce to bring the story to life. It features four bold individuals who have the power to explore and discover, as they take us on a journey set amongst the natural beauty of the British countryside. A spirit of duality – blurring the lines between reality and fantasy. They bound weightlessly through fields, defying gravity as they take flight – resisting convention. New perspectives are explored as they jump and twist through towering forests. As they float across a lake, they challenge the obstacles of the elements and the natural world. At the end of this hyperreal dreamscape, the four characters come together magnetically, becoming one entity flying through the sky, united in their differences. A symbol for our interconnectedness with nature and each other. – from Burberry. 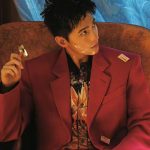