Conversations With Friends star Joe Alwyn talks about his beginnings, his new role, privacy, engagement rumors, and more for WSJ. Magazine‘s May 2022 edition. In charge of photography was Harry Carr.

On his early beginnings:

“Every family has stuff they go through,” Alwyn says. “But I can’t really complain.” He briefly took guitar lessons and around 13 played in “an awful school band called Anger Management,” he says, laughing at the idea that any of the members had anything to be remotely angry about. He played sports—rugby and soccer—and took in a lot of theater and film. “I’d always kind of secretly wanted to be a part of that world,” he says. “But I didn’t know really where I necessarily fit in.”

On his most traumatic drama class:

He went on to enroll in the Royal Central School of Speech and Drama in his hometown, where he was introduced to the art of clowning, a course he says he’s blocked out because of the trauma. “You’re wheeled into a room and your classmates are standing there and you’re told: ‘Make them laugh.’ It just felt like torture. That was not the class for me.”

On stepping into his role as the rakishly handsome Nick Conway, a married actor who is the sole male member of a modern love quadrangle:

“[It’s] the first time I shaved in like two years,”

“I tried to do a little bit of exercise but I wasn’t, like, eating all the chicken and doing all that protein shake stuff,” he says.

“We live in a culture that people expect so much to be given. So that if you’re not posting all the time about what you’re doing, how you’re spending a day or how you made a breakfast, does that make you a recluse?” He shrugs. “I’d also like to feel slightly less guarded sometimes in interviews or in whatever kind of interactions, but it’s just a knee- jerk response to the culture we live in.

On those engagement rumors:

“We both have the personality that we don’t need to try so hard. There’d be days on set where we didn’t speak to each other at all for nine hours, and then all of a sudden we’d be having conversations nonstop.”

Lane’s father died while they were filming, which revealed a protective and mature side of her co-star. “Joe was gentle and he wasn’t overly pushy, because he knew I’m not good at mushy stuff,” she says. “Boys age differently, they’re f—ing idiots until they get older. But he’s a kind man with good manners.”

“When you’re speaking to him you feel like he’s only listening to you,” says Alison Oliver of Alwyn. Having a down- to-earth co-star who “will be one of my pals, forever friends” helped the 24-year-old overcome her nerves, as did working with an intimacy coordinator and Abrahamson to plan the shapes their bodies would form during the series’ myriad sex scenes.

“There was a lot of talk about the quality of intimacy,” she says. The focus was on how each sex scene can take its cues from and help deepen the lovers’ ever-yo-yoing emotional dynamic. “Lenny puts you at ease,” she says. “His big thing is a sex scene [should] not just be dialogue, dialogue, dialogue, and then boom: sex! The way he sees it, they should be a continuation of each other.”

Garret Hedlund (his Billy Lynn co-star, close friend in the industry, and date for the 2016 Met Gala) on Alwyn:

“He’s got… the greatest head on his shoulders,” says Garrett Hedlund,

They share similar concerns about their careers, like “not wanting to step into certain roles just to do them,” Hedlund says. “I have known Joe to turn down credible scripts and films with first-time directors, knowing he wanted to be with somebody he can trust.”

This article is featured in WSJ. Magazine’s May issue out on newsstands Saturday, April 30th. Photography © Harry Carr for WSJ. Magazine – red more at wsj.com 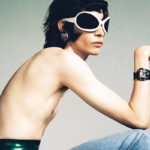 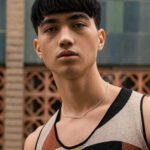