In charge of the photography was Fashion Photographer Angus Williams with styling and creative direction from Fashion Stylist Elliott Smedley.

“I really wanted to explore a sense of tailoring, sophistication and rigor once more. That idea of a masculine uniform, its world of functionality as well as military ceremony, the roots of our British tailoring traditions are so much part of these very things, I also wanted to look at how subversive and rebellious it actually feels for a younger man to embrace a strict suit as well as a shirt and tie now, to adopt an almost conventional uniform and make it so unconventional, It’s the power and rigour of clothing that makes you feel something and behave in a certain way. This collection is a return to a certain discipline and tradition, yet there is always a simultaneous sense of British subversion within what we do and in the person who might wear it,” shares dunhill’s Creative Director Mark Weston.

New dunhill menswear Fall Winter 2022 collection rounded within 31 looks explores the modern take on classical menswear pieces with a sentiment close to Weston’s clean-cut aesthetic. The looks find themselves exploring menswear classics with a dunhill take, spotlighting pieces such as Split Hem Trousers and the Wrapped Jacket with its standout shoulders. dunhill does not forget high quality materials such as cashmere used for the traditional camel wool this time used for dunhill overcoats. The collection also explores dunhill’s refreshed take on the traditional rain coat.

Tailoring gives strong sartorial vibes with perfect fitted suits and coats for the collection. However Weston and his team are also inspired by menswear’s most familiar ally, the military style sentiment. While entirely reduced to the minimal dunhill menswear aesthetic the military design elements brought in come from regimental ties as well as livery buttons.

“A certain austerity and layered severity is embraced by all. Ideas of tradition, rigor and continuity run throughout the collection, together with a certain iconoclasm; the disruption is in the person wearing the clothing, rather than the other way around. Here severity becomes subversion, a very British dichotomy where symbols of class and creativity are braught to clash with a sense of reality,” adds dunhill press team.

Discover all the dunhill menswear looks in MMSCENE runway gallery:

For more of dunhill you can also explore DSCENE dunhill fashion brand archives. 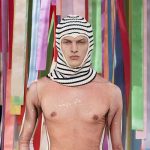 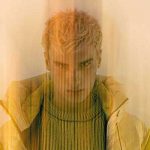