They want to bore you to death. There’d be one chance to talk to the other inmates, for like 30 minutes, up on the roof in the morning. They’d tell me what was going on with my case, because I could see my face on TV in my cell but I don’t understand Swedish. It was f—ed, man. I had worldwide coverage, and it still took me a month! People in there were telling me, ‘I haven’t spoken to my mother in a year. I haven’t seen a judge.’ And it was only black and brown people. – A$AP Rocky on his month-long detention

On the Swedish saga:
On tour in Stockholm, Rocky was walking around, looking at the Swedish architecture, he says, when he became involved in a street brawl. Ultimately charged with assault, he claimed self- defense; deemed a flight risk in a country with no bail system, he awaited trial behind bars. Fans clamored for his release, among them Kim Kardashian and Kanye West, who brought Rocky’s case to the attention of none other than President Donald Trump. He in turn tried to flex some ambassadorial muscle, dispatching a veteran hostage negotiator to broker Rocky’s freedom, which finally came in early August, by which point he’d spent more than a month in detention. A panel of judges found him guilty but decided the assault wasn’t serious enough to merit a prison sentence.

Despite past lyrics from Rocky that have been harshly critical of Trump—he’s called the president an “a—hole” and linked him to the Ku Klux Klan—today he speaks carefully: “He called me shortly after I came out. He was just like, ‘How you doing?’ I was like, ‘I’m good.’ I thanked him, and that was really it. Cordial.”

In public statements during Rocky’s detention, Trump cast himself in part as acting on behalf of “the African-American community,” leading some observers to speculate that the president saw an opportunity for a public-relations boost with that demographic. I ask Rocky if he got the sense that Trump wanted something in exchange for helping him. “Man, I wouldn’t know,” he replies. “That’s a very big possibility. I was just thanking whoever helped me when I was in that shit. I wasn’t concerned with anyone’s motivations.”

The strangeness of the whole affair only intensified when Rocky’s name came up during congressional impeachment hearings, in testimony from Gordon Sondland, the U.S. ambassador to the European Union, and State Department official David Holmes, who recalled Sondland advising Trump, of Rocky, “Let him get sentenced, play the racism card, give him a ticker tape when he comes home.”

Recounting this saga today, Rocky frames it as a deeply surreal experience whose most lasting upshot might be the unlikely exposure he has enjoyed among a whole new demographic: “All these old folks know who A$AP Rocky is now,” he says, cracking up. “It’s hilarious. Old folks be like, ‘That A$AP Rocky kid ain’t too bad, huh?’”

On his month-long detention:
“When I first got there, the guards treated me like shit. You had crazy people yelling, echoing, screaming in the middle of the night.” He eventually moved to relatively nicer quarters, with friendlier guards where the biggest problem was boredom. “They want to bore you to death. There’d be one chance to talk to the other inmates, for like 30 minutes, up on the roof in the morning. They’d tell me what was going on with my case, because I could see my face on TV in my cell but I don’t understand Swedish. It was f—ed, man. I had worldwide coverage, and it still took me a month! People in there were telling me, ‘I haven’t spoken to my mother in a year. I haven’t seen a judge.’ And it was only black and brown people.” (Sweden doesn’t keep statistics on ethnicity and crime, but according to the country’s Prison and Probation Service, in 2018 foreign citizens made up 30 percent of the prison population, an incarceration rate 3.5 times higher than that of people with Swedish citizenship.)

On the inspiration for his new album:
While crafting the new album, Rocky explains, he’s been working obsessively, to the extent that he’s covered his New York apartment with a sprawling blueprint made up of inspirational images: “It’s kind of like a vision board. I compile different points of reference and print ’em out and put them on the walls, so I live in it. It’s like when you go to a police precinct and the detectives have the investigation laid out.” What kinds of images has he got up? “Mostly pictures of myself,” he says matter-of-factly. “You gotta analyze who you are as an artist and know yourself better than anybody. Then people can never dictate shit to you.” His eyes widen. “I’m in it, man. I’m chasing the dragon. I’m so fascinated with everything I do, and so passionate, that it comes across a little comical if you’re the type of person who isn’t passionate about anything.”

On drugs:
“It’s all about mushrooms and LSD,” he says. “When you have a good trip, you feel more enlightened and have an understanding for self and other people. It’s less about tripping balls and more about some spiritual third-eye shit.” For example: “I was here in this room one time, doing LSD, and as I was coming down the sun was coming up, and the birds started singing and we recorded the f—ing birds. They weren’t tweeting, they were harmonizing and holding notes! And I was, like, communicating with them, because music is universal.”

Dev Hynes, aka Blood Orange, his friend and collaborator who’s worked with artists as varied as Solange Knowles, Florence and the Machine and Philip Glass, on A$AP Rocky:
“He’s always stood out to me. There’s an inventiveness and exploration in what he does, but it’s always rooted in rap, and it always feels genuine.” Hynes says that when they spend time together, “it’s really just hanging: getting our nails done, talking about other shit, music and movies, but it always fuels back into the work. It’s why he connects with all these people like me or Tyler, the Creator or Frank Ocean—we’re recording in bedrooms and hotel rooms and kitchens and it all stems from hanging out.”

On his penchant for jumping into mosh pits:
“It’s therapeutic,” he says of his love for moshing. “I guess I have somewhat of a semi-violent past, and as you get older and you’re upset about things, either you catch an assault charge or you go hit a punching bag. For me, I go in the mosh pit.”

On his childhood:
His father was “a big-time drug dealer” who uprooted the family from New York to Pennsylvania, chasing drug money, when Rocky was 8 years old. “My dad was a hustler, and the hustle brought him to Pennsylvania. He used to hustle in Harrisburg; he moved the whole family to Rutherford and Hershey,” Rocky recalls. One effect of this move was to make him adaptable: “I went to an all-white school there—there were probably like six or eight black people out of hundreds. By the time we moved back to New York, my friends were everybody. My world wasn’t just in one radius.”

On recording at Electric Lady Studios, the Greenwich Village recording complex Jimi Hendrix built just before his death in 1970:
“Hendrix inspires me,” he says in a croak-whisper, regarding the room. “The energy here is very warm—not just acoustic warmth but an energy of almost, like, Zen. I’m fascinated by Jimi’s story. Left-handed guitarist, playing his guitar upside down.”

On editing songs for the new album:
At one point Rocky actually dismisses a song as too catchy for its own good: “That sounds like a hit. I’m scared of hits.” 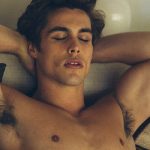 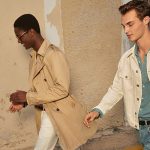