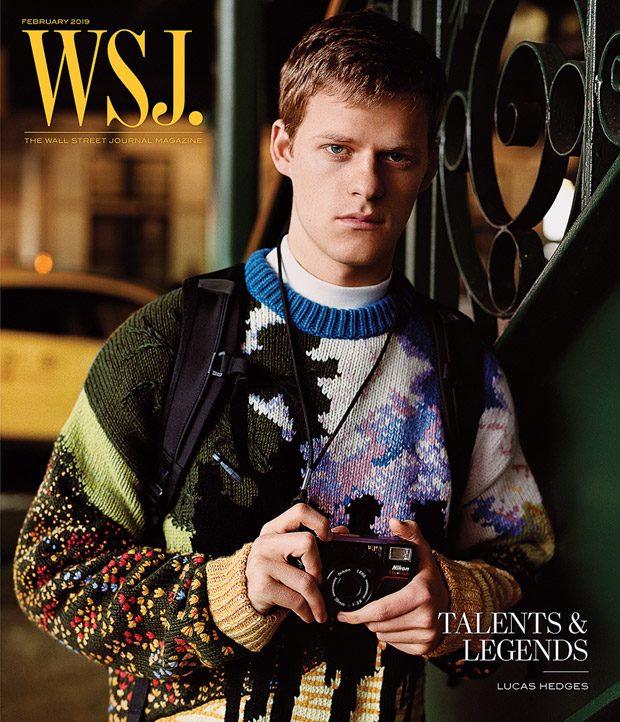 “There was definitely a dream of being with somebody that never came true at that point in my life. It just didn’t feel like an option to actually be transparent with what I was going through. I really was trying to find myself through all these different relationships.” – Hedges on his childhood

Hedges on playing ordinary young men navigating strained and tumultuous periods of their lives:

“My brother gives me a lot of shit for it, actually,” Hedges says of his roles. “He’s like, ‘Most people in the world aren’t going through what your characters are going through.’”

Hedges on Ben Is Back—which was directed by his father, Peter Hedges—on addiction:

“It has really threatened the lives of certain people in my family; [it] has made the problem very real to my father, which made it, in turn, real for me, too,” he says.

Hedges on deciding to act:

“I remember feeling like my dad was going through something magical,” Hedges says. He wanted that life for himself and says his early acting ambitions were driven by egotism as much as artistic intent. “I wanted the kids in my class to come see me,” he says. “I wanted them to feel like they missed out on something.”

“A lot of my career ambitions up to this point,” he says, “have been to try to compensate for the fact that I really didn’t feel like the person I wanted to be my whole life.”

Hedges on being compared to other leading men:

“I do think about why there isn’t, like, a River Phoenix or somebody who I experience as being magical and ethereal and culturally historical,” Hedges says before pausing and admitting, “I do actually experience that with Timothée.”

Hedges isn’t the type of young star with dozens of obsessive Instagram fan accounts. “In my best moments, I feel compassion for that—I think that’s really dangerous and I wouldn’t know how to handle it,” he says. “In my worst moments, deep jealousy.”

Hedges says he doesn’t aspire to heartthrob-dom. “I think I have a realistic sense of myself,” he says. “The kind of actors I look up to are not the Rob Lowes. That’s not to say I haven’t wanted to be those guys.” “I know some women who are in love with Paul Dano,” Hedges says. “Colin Firth, perhaps?”

Julia Roberts (who plays his mother in the film) on Hedges:

I just immediately cast Lucas in my mind.” “He has all these unnamable qualities that make him so wonderful.” “We’d sit in the trailer in the dead of night, when it was cold outside, and we talked about some things with incredible depth,” she says, before suggesting there was another side to Hedges. “But sometimes we’re just talking about the silliest bullshit. As serious as he seems—and he plays these very intense parts—he is just a joy to be around.” “He’ll be able to go back and forth from leading parts to character parts,” she says. “I don’t know if the floppy hair is in the cards for him, but everything else is.”

Hedges says that on Honey Boy he “experienced a new way of doing things and a kind of transcendence of what I thought was possible “I’ve always wanted to give 100 percent. But I’ve never seen 100 percent pure effort until I worked with Shia,”

“Mainstream audiences might think, ‘That guy’s weird.’ Other people see [his] work and they’re like, ‘That’s amazing,’ which I guess is probably a pretty good description of a great artist’s career.”

He says Hedges reminds him of Robert Duvall – “Neither has ever had one false second on-screen”—and that, among actors, “Lucas is top 10 walking around right now.”