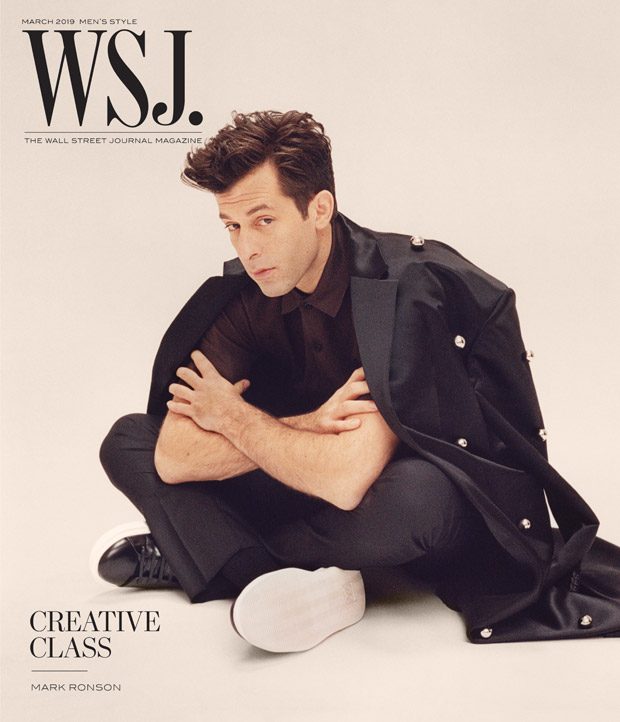 “We were all going through relationship s**t, everybody was willing to bring their troubles to that song. Like therapy, even though there’s so much hurt in this song.” – Ronson on co-writing Shallow with Lady GaGa while producing her album Joanne.

The collection of danceable expressions of longing and heartache with titles such as “Don’t Leave Me Lonely” (sung by Yebba), “Pieces of Us” (with vocals by King Princess) and “Truth” (featuring Alicia Keys). More specifically, for Ronson the record is a labor of love lost, a confessional piece of art forged in the flames of his failed marriage. Nearly six years after Ronson married Joséphine de La Baume, the French actress and model, the couple divorced in 2017.

“It wasn’t conscious—I wasn’t like, ‘OK, I’m gonna make this my breakup album,’” says Ronson. “I don’t want to seem exploitative. [De La Baume has her] own pain and trauma. Both of us are… living it. The simple fact of the matter is I was going through these things, and I had to make a record. They were gonna collide at some point.”

“This was writing from the point of view of an emotion first, then figuring out the beat,” he says. “What’s funny is this is my most melancholy record but my most consistently dancey record.”

“Two or three months ago, I just went into this f—ing place—I was just spinning out,”

“I think it’s one of the most honest things I’ve ever written.” It also represented closure, or at least the start of it. “I’m past some of those emotions,” he says. “I’m not in that bad of a place. Or like I was then.”

Ronson and Miley Cyrus on their collaboration, “Nothing Breaks Like A Heart”:

On the inside of his right arm is a tattoo of a cracked heart-shaped disco ball—the logo for “Nothing Breaks Like a Heart”—drawn to cover an earlier tattoo of the name “Joséphine” inside a red heart.

It took Ronson four years to make it happen.

Ronson first texted her in early 2015 after seeing her sing Paul Simon’s “50 Ways to Leave Your Lover” on SNL’s 40th-anniversary special but never got a reply. His subsequent stream of messages was met with the occasional emoji or non-sequitur (e.g., “Heyyyyyyy” or “What Up”). Cyrus, who doesn’t save any numbers in her phone (“I don’t even have my grandmother’s,” she says), had no idea who was texting.

Finally, once the chorus and bones of “Nothing Breaks Like a Heart” were in place, Ronson tried one last time. To his shock, she replied right away: “Yeah. I love it. Is Tuesday good?” Cyrus blew into Shangri-La, Rick Rubin’s Malibu recording studio, like “a whirling dervish,” Ronson recalls. “I knew the minute she sang it, this is gonna be pretty special.” By the time the lyrics were finished that night, the admiration was mutual. “Seeing the way that he works, I was immediately addicted to the process,” says Cyrus. “He’s such a listener that you instantly feel he’s present.” “Then, he’d come back the next day with music, this sonic dream that somehow says all that you spit at him.”

Ronson on being on best-dressed lists:

He pokes fun at the red, black and green Supreme leather puffer jacket that he’s wearing. “I once saw myself in a ‘Who Wore It Better?’ contest with Rihanna in the same jacket. We know what the outcome was,” he says with a laugh. “I’m just getting over that.”

Ronson on his musical and colorful youth:

Even before he could walk, Ronson was drawn to the beat. He’d be awakened in the middle of the night by his parents’ frequent parties, which often included rock-and-roll royalty, and follow the sounds of music. “There would be like 40 oblivious grown-ups getting wasted,” he says, “and I would just crawl as close to the speakers as I could get and air drum, keeping the beat to James Brown or Bad Company, whatever was playing at a ’70s English key party.”

Dua Lipa (who collaborated with Ronson on “Electricity”):

“He continues to create new things and experiment but at the same time stay true and authentic to himself,” says Dua Lipa, “He’s so old school in the way he works. He wanted me to get in the mood and sing the song over and over again. He made sure we had good full takes to use. It’s so different to the way lots of other producers work—word for word, things can be edited and fixed. It makes the process so much more organic.”

Ronson on his distracting ear for detail, which can take the joy out of music and life’s pleasures:

“I couldn’t listen to music during sex,” he says. “I would be thinking, ‘I wonder how they got that snare drum sound,’ you know?”

Ronson on winning the Golden Globe for Shallow:

With an overwhelmed Gaga onstage, Ronson accepted the award and spoke about her talents. “I’m sure 97 percent of people watching at home were going, ‘Who is this guy? Why is the guy from the “Uptown Funk” video talking?’” Ronson says. “It was cool. It was f—ing lovely to win.”

Ronson on contemplating his legacy:

“It’s probably the first time I’ve ever felt comfortable enough in my career,” he says, “that if it all did go f—ing pear-shaped tomorrow, I feel like my standing and my contribution to pop music the last 10 years is pretty solid.”