Salvatore Ferragamo is ready for the new season with the release of the Spring Summer 2020 collection campaign shoot. In charge of the photography is the prolific Harley Weir who photographed runway sensation Alpha Dia as well as actor and producer David Kammenos posing in label’s men’s looks. Joining the men of Ferragamo are also top models Malgosia Bela, Abby Champion and Sora Choi posing in the spring summer 2020 looks. Ferragamo team shared:

A diverse cast showcases a layered and sophisticated collection by Ferragamo’s creative director Paul Andrew in which the artisanal plays against the directional to create pieces that transmit ease, confidence, individuality, and above all, freedom. The mercury is rising in a portfolio of images and video that are designed to conduct a tangible sensation of midsummer’s heat. The joy of friendship and the thrill of discovery are heightened by the sensual pleasures of sunlight.

Alpha Dia is one of the most in demand male models on the scene, ranked in MMSCENE’s top 30 most searched models, he’s represented by Next Models in New York and Crew Model Management in Milan. Dia walked for only in the last season for brands such as Fila, Boss, Missoni, Kith, Kenzo, Thom Browne and Balmain to name a few. Adding to the list of his his last season’s runways is also a walk for Salvatore Ferragamo. In the last season Alpha Dia is also the face of brands such as Boss, Canali and Givenchy.

Joining Alpha is actor and produce David Kammenos an actor and producer, finding fame for his rolses in Transporter 3, Empire of the Wolves and Los Soles Vagabundos and he’s currently starring in the La Dernière Vague mini series.

In charge of the creative direction for the session by Harley Weir was Ferragamo’s creative director Paul Andrew who from this season also took the helm of the menswear line as well.

Discover more of the shoot: 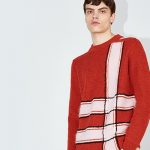 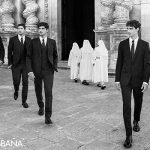