That was my escape, my desertion. Down in that tiny speck in the world, HOLLYWOOD seemed a bright and shiny star. Nine letters dripping with desire. – Alessandro Michele

Inspired by his mother, who worked in the film industry as an assistant in a production company, and all the stories she told him, Michele created an alluring collection that mixes the old Hollywood glamour with contemporary Los Angeles style. Back then, we lived in a squat in the outskirts of Rome. I needed to be able to breathe. Those subversive tales helped me in piercing the grayness. – he remembers.

All around these demigods unfolds the city of angels, where a blessed light streams throughout. This is where I met the most peculiar people, out of time, refractory to any idea of order. I have always observed them as in procession at the slopes of the acropolis of dreams. Eager to offer themselves as gifts of uniqueness. A parade of enchanted and deeply free beings that go across a land where neither past nor future reside: only the miracle of the imaginative flair. Mum always told me about it: Los Angeles shines in its own magic, which is timeless; it’s a place that brushes the divinities, becoming a mythology of the possible. – Alessandro Michele

Discover all the looks: 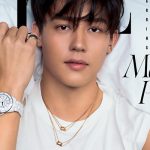