I want to get back to the undefined space again, I’m chasing a feeling. When you think you’re doing some great thing, it’s probably something you’ve done before, and when you really fucking have no clue, that’s when you’re doing something on the edge, good or bad. – Chalamet

Maybe I’ll never do a great work of art again, but I just feel like I’m confident in the way I’m trying to approach things now, how I’m setting up the angles. When you think about Dylan. When you think about what Joel Coen said about the rapidness of the art, I’m just like: Trust the beat of your own drum. Give this its best shot. Give your artistry its best shot. – Chalamet

His positive energy is infectious.He really is so much fun to be around. We have very similar humor, and we can keep a joke going for a long time, but when the cameras start rolling and it’s time to work, you can see it’s game time, and he just taps into this brilliant intensity. It’s awesome to witness. – Zendaya

He’s had such incredible opportunities, and he doesn’t let the reality of that pass him by. He’s incredibly gracious and grateful in relation to his work and the people he works with. I think he’s become more open as an actor. He knows his instrument more. I think he works even harder now because there are projects that are on his shoulders in a way that they weren’t before. And of course he’s been totally catapulted into this whole other realm of attention and notoriety. So he’s also having to balance the incredible fame and attention, which would completely freak me out if it was something I had to go through. – Saoirse Ronan 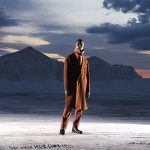