Chrome Hearts is a brand that seems to be popping up everywhere these days. However, the Los Angeles luxury label is far from a newbie or the current “it” brand. Chrome Hearts has been in business since the 1980s, building a full biker-inspired lifestyle with high-quality leather, sunglasses, jewelry, and home products.

Chrome Hearts was founded in 1988 in Los Angeles by Richard Stark, John Bowman, and Leonard Kamhout to create biker culture-inspired items that Stark himself couldn’t obtain, particularly jewelry and moto jackets. Since then, the design firm has extended to include furniture, apparel collaborations, kitchen products, motorcycles, and other goods. With wife Laurie Lynn beside Richard Stark now, the two have now involved their children in order to expand the reach of Chrome Hearts through celebrity friendships and social media presence.

Chrome Hearts had captured the attention of the fashion world by the early 1990s, but Stark has never been interested in being labeled as a fashion brand, despite its links to the field. Chrome Hearts won the CFDA Accessory Designer of the Year award in 1992, solidifying its reputation and raising brand exposure. Cher, another musical great who adored the company, even presented Stark with the prize while dressed entirely in Chrome Hearts garb. He nearly didn’t accept the coveted award since he wasn’t familiar with the CFDA at the time.

Unlike most luxury labels, Chrome Hearts’ brand identification approach has allowed it to transcend the same category of fashion and become a cultural phenomenon in a short period of time, without relying on the traditional media and commercial channels for the present luxury sector. Because of its interdisciplinary character and emphasis on craftsmanship, it has been able to extend across all fields of production, making it an already realized example of that new notion of luxury that values the cross-identity of a brand and its community rather than its status symbol.

Chrome Hearts’ Matty Boy Spider Web T-shirts are available in a fashionable purple color. The T-Shirt, released on August 14th, 2021, has a black Chrome Hearts logo on the front chest and a Matty Boy-designed Spider Web graphic on the back.

Chrome Hearts teamed with the Rolling Stones on a limited-edition capsule collection in 2011. Along with jewelry and leather accessories, the line included these classic T-Shirts with logos from both the brand and the artists. The back has a large Rolling Stones lips and tongue emblem that is framed by the Chrome Hearts logotype. Pair it with washed black skinny jeans for a rock inspired look.

The Chrome Hearts Horse Shoe Logo Pocket T-Shirt adds an exciting rock element to an otherwise understated staple piece, whether you dress it up or pair it with blue jeans for a casual daily outfit. As usual, Chrome Hearts pieces provide an outstanding fitting across the upper portion.

The Chrome Hearts x Matty Boy Space T-Shirt in blue adds a pop of color to your outfit. This is another collaboration with artist Matty Boy and features a distinctive Spaceman print on the back, and an abstract tribal like fire graphic print with overlapping faces as well as a Chrome Hearts logo above the pocket.

This Chrome Hearts  black cotton t-shirt features a unique print that glows in the dark. The black cotton is a perfect canvas for the glowing gothic print.  The reselling of popular  Chrome Hearts items is a thriving industry right now, and they are usually rather expensive. This T-shirt is among the favorites and is usually sold out within minutes. 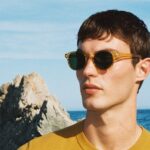 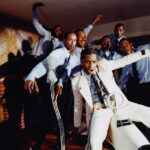