New Marni collection was presented today during Milan Fashion Week‘s entirely digital schedule. While the whole list of fashion brands has opted out of audience at their runway shows, many brands have also scrapped a runway show concept. However Marni team has since the start of the pandemic entirely scrapped the idea of a runway show. Instead a series of fashion films featuring a striking cast going from breakfast to dinner presents label’s latest collection.

In charge of the styling for the striking Fall Winter 2021 collection was the famed fashion stylist Camilla Nickerson, while the visuals were art directed by Babak Radboy all under creative direction of Francesco Riso. Leading the cast are stars Mykki Blanco, Zsela and Steff Stover joined by Paloma Elsesser and Lulu Prost among other.

“This Marni collection took shape as a romantic ode to dressmaking at its most tactile and intimate. A love letter, actually: blatant, at times even proudly banal, so intense and overwhelming is our collective urge to feel, touch and feel some more. We kept asking ourselves: what is romantic and what is romanticism nowadays? Back in the day, Romanticism, as a movement, was born as a reaction against the rational, as an opposition to social norms. It legitimized the individual imagination as a critical authority. Today, Romanticism feels more powerful than any form of protest: a way to delve into reality with another gaze and another touch, finding another meaning to the everyday,” shares Francesco Riso in his personal letter to the press and collection viewers alike. 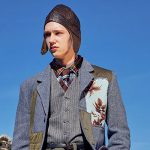 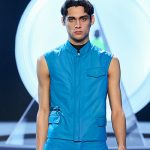