Luxury fashion house GUCCI presented the Spring Summer 2023 Menswear Collection, with a lookbook and presentation, held during the ongoing Milano Fashion Week. The collection is a celebration of Creative Director’s Alessandro Michele and pop star’s Harry Styles long friendship. The duo presented the GUCCI HA HA HA collection which is the intersection of creative expression and shared perceptions of two different consciences: this is why it is a collection born from a creative relationship that self-generates from amusement and ends with the tangibility of a product. HA HA HA is the serial crasis of the initials of ‘Harry’ and ‘Alessandro,’ but it is also the onomatopoeic sound of the written essence of an emoji, the ‘laughing face’ which has been a signature ending of their conversations for years.

Harry has an incredible sense of fashion. Observing his ability to combine items of clothing in a way that is out of the ordinary compared to the required standards of taste and common sense and the homogenization of appearance, I came to understand that the styling of a look is a generator of differences and of powers, as are his reactions to the designs I have created for him, which he has always made his own; these reactions restore me with a rush of freedom every time. The idea of working together came to me one day while we were talking on the phone: I proposed creating a “dream wardrobe” with him, starting from those small oddities that come together in childlike visions. We ended up with a mix of aesthetics from 1970s pop and bohemian to the revision of the image of the gentleman in an overturned memory of men’s tailoring. – Alessandro Michele

Gucci HA HA HA is a playful collection designed to act as a herald of new visions of beauty,crafted with liberating codes that eliminate the ritual complexities of fashion collections and produce the sustainable spontaneity of ease, just as nature is easy even when it expresses itself with the vision of complexity. Jackets, coats, pants, shirts, and accessories that manifest a novel emotive passage able to construct a study on a surprising take on masculine elegance with clothes that declare their love both to the materials with which they are made and to the historical significance of their forms, volumes, and of the images they produce. A dialog, a game, the complicit expression of a friendship that was formed from a planning that collects encounters, stories, similarities, and differences, to produce liberating codes. – from GUCCI 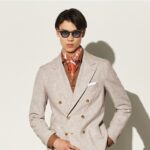 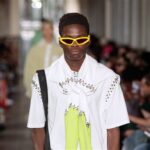