Luxury house LOUIS VUITTON presented their Pre-Spring 2023 – Fall In Love Capsule Collection, that explores similarities between DJs and designers: both sampling and reimagining established genres to create new sounds / looks for new generations. The collection was inspired by the legendary Loft Parties created by the American DJ David Mancuso in 1970s’ New York. Mancuso, considered the first-ever DJ, hosted the listening parties, by invitation only, in his New York apartment – The Loft, the first of which took place in 1970. He practiced to play records from beginning to end. The collection was conceived by the late designer Virgil Abloh, and carried out by the creative teams and collaborators with whom he continually worked at Louis Vuitton.

“Echoing Mancuso’s full-record sets, the ‘Fall in Love’ collection is constructed like a complete wardrobe. A contemporary silhouette loosely informed by the 1970s cuts a lean line expressed in snug jackets and trousers that span the wide and the flared. Rollnecks and a red suede jacket play to that mood while hinting an idea of stagewear. Equalising dress codes, a two-button notch-lapel black suit mirrors the clubwear ease of a sculpted black tracksuit. Their properties meld into a logo-embroidered moleskin over-shirt and a formalised rainproof jacket with monogram topstitching. A technique likewise employed on leather jackets, topstitching appears in a distressed flower logo created in the image of soundwaves. Graphics promote the imaginary Louis Vuitton single Love Potion.

Inspired by op art, an optical print interprets the monograms of Louis Vuitton in an illusory pattern, while shirts adorned in music notes nod to the parallels between sound and fashion. Workwear covered in grease-effect paint motifs pays homage to the idea of the artist, a sentiment further expressed in bird prints featured throughout the collection as a symbol of freedom, both artistically and as the core of the universal values shared by David Mancuso and Virgil Abloh. Shoes reflect a 1970s sensibility contemporised for present-day dressing: a suede chukka boot and a square-toed leather loafer are set on a slightly plateaued foam sole with monogram decoration, and soft leather dancing shoes – created in loafers as well as oxford styles – are imbued with the wear of movement.” – from Louis Vuitton 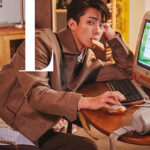 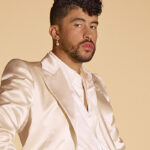