French footballer Kylian Mbappé has joined Dior’s global family of brand ambassadors. The Paris Saint-Germain star striker will now be lending his image to the creations of Kim Jones, for Dior Men’s collections, and to the Sauvage perfume.

Today, the house of Dior is particularly happy to welcome Kylian Mbappé with whom it shares the same values of exacting standards and generosity.
– says the press release.

Mbappé is involved in numerous charity initiatives, including the “Premiers de Cordée” association, which provides sporting initiatives for hospitalized children. He has also launched his own association “Inspired by KM”, with a mission is to inspire children to reach their goals.

World champion footballer Kylian Mbappé is, at only 22 years old, one of the major players in the French national team, with which he won this prestigious title in 2018. His impressive career saw him designated best young player by FIFA in the same year, and he also won the KOPA trophy for best under 21 player of the year worldwide. More recently, on November 13th 2021, he scored the first quartet of goals since 1958, during a match that saw France qualify for the 2022 world cup. – from Dior. 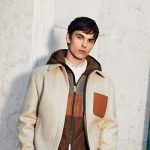