“The Spring Summer 2022 Prada Linea Rossa campaign, photographed by Johnny Dufort, captures the collection in dynamic, ceaseless action in a futuristic environment. In Dufort’s imagery – and an accompanying film short by director Albert Moya – four figures are caught in a game of futuristic table tennis, striking forehand and backhand in an intricate choreography, a team unified.” – from Prada 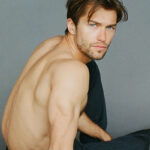 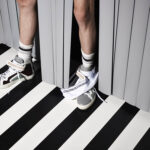