Fashion brand XIMONLEE unveiled its Fall Winter 2023.24 Collection, inspired by an idea of a contemporary romantic fighter, on January 18th, during the ongoing Paris Fashion Week. The collection captures resilient, defensive and self-protective character, with looks inspired by classic military and leather pieces as well as by the heroine of Nausicaä of the Valley of the Wind. For the season designer Ximon Lee continues to explore gender neutrality within menswear.

“The silhouettes of the season emphasise a kind of warped rigidity, as well as a contrast between sternness and recklessness.Chunky forearms and calves illustrate warrior-like outerwear, contrasting with some of the other more body fitted pieces. The collection has a heavy focus on the different layering, drapery and folds from fabric languages, and the contrast of different body volumes, such as the memory leather used in a blazer and biker jacket that creases like paper. Our signature hand- stitched crease work that gives an illusion of accidental temporality, appearing on pants, tank top, overcoats and jackets. This textural motif of gathering continues on accessories, such as the crossbody tote “bra bag” and arm sleeves. This season also explores the potential of detachable pieces, such as detachable long coats and pants that transform into more dramatic, colossal and vertical silhouettes. Our signature chain lock design also appears on unisex skirts and long dresses with range of constructed details.” – Ximonlee 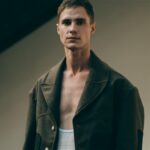 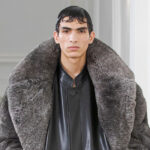