The Air Jordan 6 remains one of the most popular models in the Jumpman lineup. The 1991 model was recently revamped in everything from a retro ‘UNC’ colorway to the brand new ‘Red Oreo’ and a Washed Denim colorway. The Air Jordan 6 ‘Georgetown’ colorway is up next. After the introduction of the Air Jordan 1 High ’85 ‘Georgetown’ in April this year, Jordan Brand keeps the love going with a second 2022 release inspired by the D.C. college sports team.

Discover more about the new colorway below:

The Air Jordan 6 was designed by the famous Tinker Hatfield and debuted over two decades ago in 1991, just after Michael Jordan won his first NBA Championship. The sixth Air Jordans model of the NBA legend’s brand sent shockwaves across the sneaker market owing to its exceptional style and appeal. The Air Jordan 6 is as popular now — among Jordan fans and sneakerheads alike — in not just its original colorways, but also in a variety of its more recent collaborations and Retros.

Michael Jordan gave the designer specific instructions: he needed a clean toe. Hatfield made certain that the Air Jordan 6 had reinforcement around the toe, making it the first basketball model to do this. Jordan was complaining about having difficulty putting on the previous five versions, so he developed two holes on the top of the tongue and one loop on the rear to make them easier to put on. He referred to this function as a “spoiler.”

The original “Infrared” colorway, which essentially launched a legacy that is still going strong, has seen a number of Retro releases since its beginning, the most recent of which was in February of 2019. A few months later, the sneaker would see another major revival: the infamous DMP (Defining Moments Pack) colorway. The Defining Moments moniker returned in a true-to-form structure, one that underscores the Nike umbrella’s new focus in recreating its history.

In the fall of 2019 Travis Scott added his own distinctive flair to the silhouette. The pair, consistent with his love for the military aesthetic, had the customary Cactus Jack branding as well as a functional cargo pocket at the ankle.

There appears to be plenty more Air Jordan 6 love on the way. After numerous intriguing iterations, Jordan Brand is now pouring its love on the Georgetown Hoyas with the new ‘Georgetown’ colorway. Taking visual influences from the Georgetown Hoyas, the newest Air Jordan 6 ‘Georgetown’ comes dressed in a ‘Magnet’ and ‘College Navy color scheme.’ The upper is predominantly made of supple grey suede and is accented with blue at the midsoles, heel clips, and Jumpman logo on the outsole. The suede’s rugged look is perfectly complimented by the satiny tongue pieces, which are likewise made of neutral grey materials. Reflective perforations add to the shoe’s features. Numerous perforations on the sides, tongue flaps, and around the collar area of the shoe improve airflow. The suede medial panels feature reflective 3M perforations. Of course, traditional ice transparent outsoles complete the look – a hallmark motif for Michael Jordan’s early-90s style. The translucent midsoles are joined by neutral grey outsole sections, and the navy-hued Jumpman branding is inserted at the base in between.

In the coming seasons, fans can expect head coach Patrick Ewing and his squad to wear the Georgetown colorway on the court.

The Air Jordan 6 “Georgetown” will be available on September 3rd at Nike.com and select Jordan Brand retailers at a recommended retail price of $200. These will undoubtedly be difficult to come by. With the release date approaching and the pair’s growing popularity, make sure to grab yours on GOAT and Flight Club. 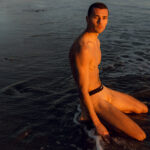 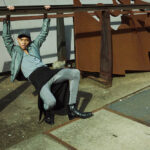