Even thought it somehow feels that Yeezys have been around forever, the first pair of Adidas Yeezys were only released in 2015. One of the most hyped trainers in recent memory, the YEEZY BOOST 350 V2 debuted in 2016 during the iconic Yeezy Season 3 show, held at Madison Square Garden. Still one of the most hyped Yeezy silhouettes, it  is known for its limited edition releases and the new colourways being released sporadically throughout the year.

The newest evolution of one of the most well-known YEEZY silhouettes, the all new Yeezy 350 V2 CMPCT “Slate Red” is the second colorway to release under the all new CMPCT silhouette, following the release of the of the YZY 350 V2 CMPCT “Slate Blue” that is expected to release later this month. The  shoe comes in a saturated crimson hue and it features a Primeknit upper, with an abstract woven pattern and a lacing system reminiscent of the Yeezy 450. Despite not being featured in the name of the shoe, the YZY 350 V2 CMPCT “Slate Red” has an enclosed full-length BOOST midsole. The release of the shoe is scheduled for February 22nd, set to coincide with a release of Ye’s upcoming sequel album, ‘Donda 2’, which is executive produced by Ye’s close affiliate, American rapper and producer, Future.

The original Yeezy Boost 350 was first released in the summer of 2015, shortly after the highly coveted 750 model. The ‘V2’ was unveiled a year later at the Yeezy Season 3 show, at Madison Square Garden, with a subtly changed design. Mainly based on the original 350 model, the changes are seen most notably on the sole which became wide and transparent, showing off the Boost tech underneath. Since then, numerous colourways have been released and there’s certainly more to come.

The popularity of Yeezy Boost 350 comes from its deceptively simple design – the sole is the most distinctive part of the shoe, with a rounded look that hadn’t been seen before. The upper marked an entry into primeknit technology, utilizing flat knitting machinery amalgamated with synthetic yarns.

Just like the recently revealed “Slate Blue” model, the “Slate Red” features a patterned primeknit unlike all other sneakers in the BOOST 350 family. It has a sandy brown striped patterning all over the midfoot portion of the scarlet colored sneaker, as well as a low cut, sock-like fit and an enclosed full-length BOOST midsole. The sneaker also features brilliant red laces mated to a crimson sole.

It is a slightly compacted variant of the YEEZY BOOST 350 V2 sneaker, which can be seen at the collar and sock liner – the collar is elasticated and hugs around the foot, giving a sock-like fit.

You can pick up the YZY 350 V2 CMPCT “Slate Red” over on GOAT and Flight Club now! Discover other Yeezy 350s at Flight Club. 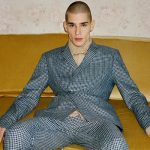 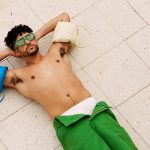