The Adidas Yeezy Boost 350 has become Kanye West’s and Adidas’ most iconic model since its debut in 2015. When the sneaker was released, it created a massive splash in sneaker history. The most notable of all was the release of the Yeezy Boost 350 Turtle Dove. Adidas’ unique Primeknit fabric is knitted into intricate off-white and dark blue patterns. With a one-of-a-kind heel tab and a rubber sole. The sneaker’s few laces ensure a secure fit on any foot. They have become so popular and replicated by other manufacturers that they’ve almost developed into their own shoe sub-genre.

Although classified as training or running shoes due to their Primeknit upper and Boost outsole, they aren’t designed to be used in that way, and 90% of those that buy them won’t. Certain colorways have resell prices in the hundreds of dollars, and let’s face it, you’re not going to work out on the treadmill.

In February 2016 Kanye release the highly anticipated successor to the sneaker, the Yeezy Boost 350 v2. The sneaker was upgraded with a transparent midsole, a new Primeknit upper, and an SPLY-350 stripe that replaced the original’s patched branding. The 350 V2 has made waves in noisy “Zebra” and “Beluga” editions, as well as a variety of core colorways that feature crisp black uppers and sharp side stripe contrast.

It didn’t take them long to acquire traction, due to Kanye’s much-hyped fashion shows, which first presented the shoes on models each season. It was a very standard procedure: the shoes were presented on the catwalk and then made accessible to the public shortly after. New colorways are now published intermittently throughout the year, so if you want a pair, you’ll have to keep a watch on Instagram.

Then there’s the hype, which is fueled in part by Kanye’s frequent appearances in Yeezys, as well as the limited edition releases, which ensure that trainer aficionados are never really satisfied. Because demand constantly outnumbers supply, sneaker reselling prices on platforms like GOAT and Fight Club tend to skyrocket. Do you want to buy a pair at retail price? You’ll have to wait in line.

The Yeezy BOOST 350 V2 ‘Blue Tint’ first hit the shelves in December 2017, the bluish colorway was one of the shoe’s more daring colorways when it was first released marking a big stylistic shift for the brand at the time – the 350 V2’s early years were dominated by earthy tones. As a result, the ‘Blue Tint’ is still on many Yeezy enthusiasts’ wish lists.

This YEEZY model features a full Primeknit upper with a large brush stripe in white on the lateral side, embellished with contrasting text in red that says “SPLY-350,” and a wavy grey and blue-grey pattern. On the heel tab stitching, there are further touches of red. The YEEZY BOOST 350 V2 is completed off with pastel blue laces atop blue-tinted midsoles and full white BOOST outsoles.

Take a cue from Kanye West himself and pair the sneakers with premium sweatpants, a crisp white tee and a cotton overshirt with large chest pockets for a more functional edge. Finish off with white socks to complement the sneakers below.

Thankfully, you won’t have to wait that long until the Yeezy Boost 350 V2 Blue Tint goes live. The adidas Yeezy Boost 350 V2 ‘Blue Tint’ is reportedly set to restock in January 22 for a retail price of $220. Meanwhile, be sure to check out our list of sneakers we’re already anticipating in 2022! 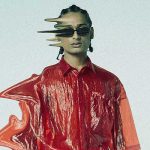 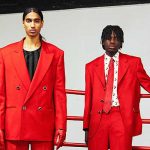